Who was George Turner? 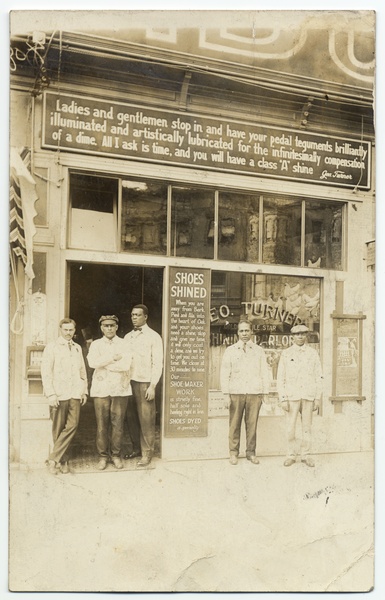 This photo shows up every once in a while, with variations on the same basic info: "A George J.P. Turner operated as bootblack from early 1900's to about 1918 according to Oakland City Directories. Had shops listed at various places including Narrow Gauge Depot on Franklin, 14th street and Clay street in Oakland." It's from the California State Library (CSL).

Coming across the photo again, with a higher resolution than the usual copies, I decided to take a closer look at it, both literally and figuratively. Who was George Turner? Where and when was the photo taken? 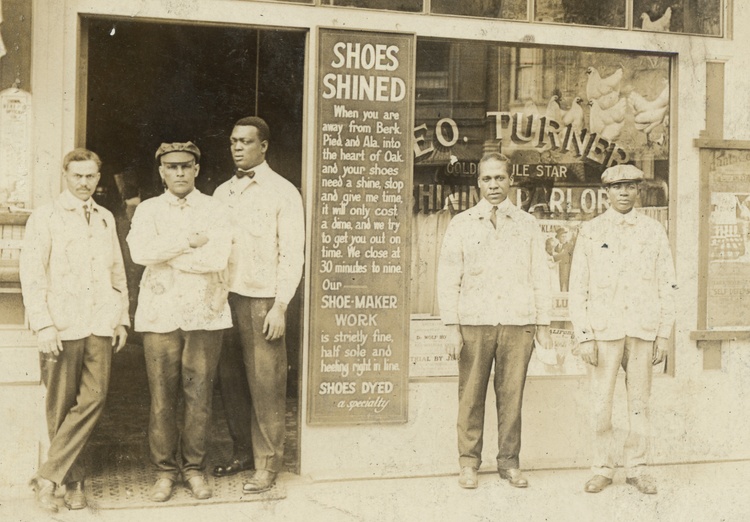 I started by trying to confirm the information above from CSL. I never did find a mention of a location on Clay St., but the rest seemed mostly accurate if a bit vague. The 1913 directory listed both 411 - 14th St. and 501 - 14th St. The latter was probably the source of the Clay St. mention, but the address was at the no longer extant intersection of Washington and 14th, across from city hall, a block from Clay. In any event, the directories all showed the 411 address, so we had a likely location for the photo.

Given that "George" and "Turner" are fairly common names, George was Black living in the early 1900s, and he was a shoe shiner not a politician or the like, I didn't expect to find much in the Oakland Tribune archives. But I got lucky, and found his obituary from 1919. This didn't give me many facts besides the date of his death, but it was a start. It also let me know that George was someone people remembered, and he had been in business for about 20 years. 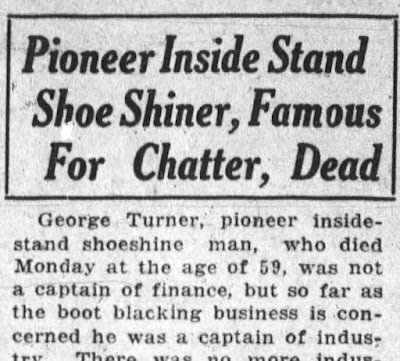 Next I found references to George being married, punctuated by this vignette about the ceremony in 1889. It was the first marriage performed by superior court judge John Ellsworth. It tells us Turner was married, and his wife's name was Josephine. Now we're getting somewhere! For the record, Judge Ellsworth says he did not kiss the bride as was the custom of Judge Gibson.

While continuing the search through the Tribune archive, I created a family tree on ancestry.com and started looking at the Sanborn insurance maps. I usually do the first when researching a person or family, and the second when researching the location of a home or business. Oakland has changed a lot over time, not the least of which are street names and street addresses (sometimes more than once), so finding historical locations for an address can sometimes be a bigger challenge than you might think.

Even knowing his wife's name, the approximate year of his birth, and the date of his death, researching the family tree didn't turn up much besides (probably) narrowing down George's birth to April 1861 in Virginia. But it did give some addresses for where the Turners lived, and suggested they probably didn't have any children. 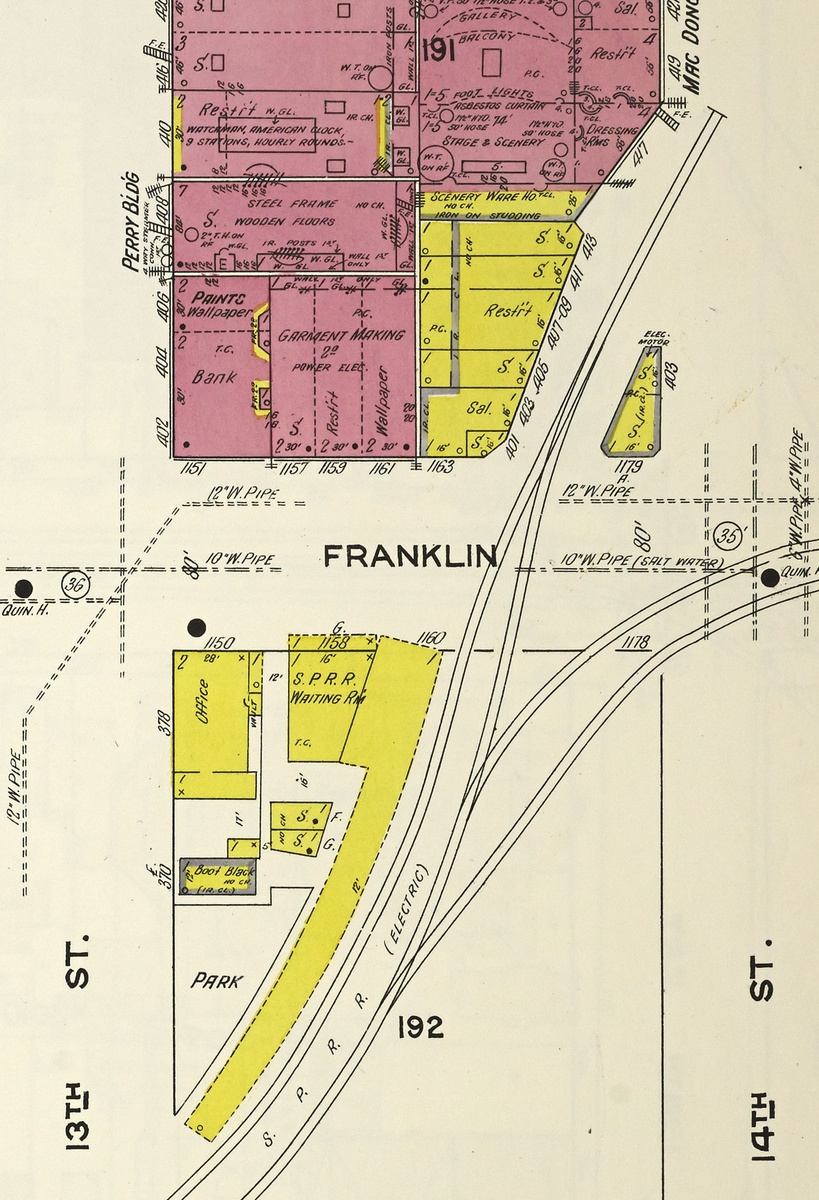 Looking at the Sanborn insurance maps proved a bit more fruitful. The 1911 Sanborn for 411 - 14th shows a location in a building between the MacDonough Theatre and the previously mentioned narrow gauge railroad station. Looking more closely at that showed a building labeled "Boot Black" immediately behind the station. OK! This along with the directory info suggested that sometime between 1911 and 1913 is when George moved his parlor from the near the station to 411 - 14th St. Refining the search in the Tribune archives turned up a classified notice confirming the move. In 1912, George was compelled to move his stand from near the train station to 411 - 14th St.

Did George start his business behind the train station? And if not, where? More searching turned up this notice of city council actions, indicating that in 1903 they passed a resolution allowing George to build a metal building near the train station. Now we've got some better parameters. From c.1903 to 1912 he was near the train station, and from 1912 until at least 1918 he was at 411 - 14th St.

Based on the building in the photo, we can probably rule out the metal structure near the train station. So most likely we're looking at 411 - 14th St., unless it's the c.1913 location of 501 - 14th St. Looking at later photos of 501 doesn't suggest that, but doesn't rule it out, either. So I set about looking for photos of that area from the appropriate time, but with no luck. Other than the MacDonough Theatre at the corner of 14th and Broadway, I didn't know any building names or businesses to reference for refining the search.

But then I remembered the 1909 photo of Albert Vander Naillen and Captain Park A. Van Tassell's launch of the City of Oakland balloon that shows that area. Suddenly it clicked, that the vague letter forms on the sign at the top of the original photo matched the "Tribune" sign visible in the 1909 photo. Bingo! The location matched, the time range matched...we have a location!

The time range is still fairly broad, though. It could be any time after the 1912 move, and probably before George's death in 1919, but not necessarily. How do we narrow down the time? (Now we're starting to get into the serious history nerd range.)

If you look closely at the right side of the CSL photo, you'll notice a poster for the Pantages Theatre which was nearby on 12th St. The sign is mostly illegible, but "Co-Eds" is visible near the top, and "Clara ??? Co." with a production called "Self Defense" is visible near bottom. Combining those with the date range turns up a brief article from October 1, 1914, describing the latest offerings at the Pantages, including "The Fair Co-Eds, Menlo Moore's newest musical tabloid of campus life" and "Clara Beyers and co. in a tense playlet entitled Self Defense." 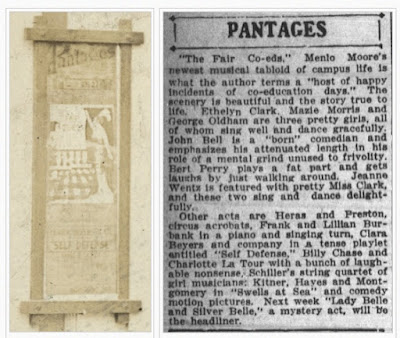 Before we can declare victory and say the photo is from 1914, consider that plays and theatrical performances sometimes run for a long time, and sometimes are revived at later dates. So looking closely at the photo again, notice the smaller poster near the center. That shows "D? Wolf" and "Trial by "Ju?". Narrowing the search with all the above, we come to "Trial by Jury" featuring DeWolf Hopper, playing at the Greek Theater in Berkeley. While this still doesn't pin the date down exactly, it's further evidence for late 1914. 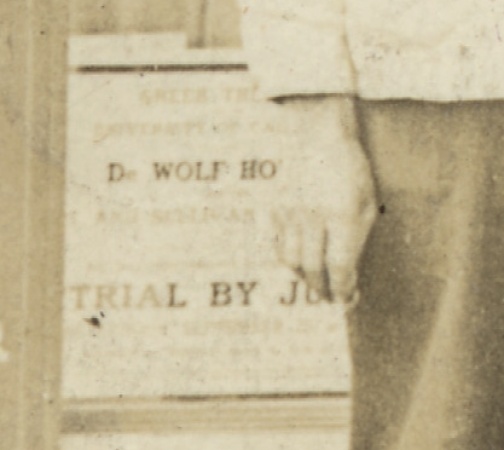 None of this is absolute, though the location of the CSL photo seems to be pretty conclusively at 411 - 14th. And the facts suggest late 1914 for the date. Like a lot of things in history, the day and time may never be known. But now at least we know where the photo was taken and have a pretty good idea on when.

But back to George and Josephine. We know when they were married, and when George died, but not much else. Did they have children? What did they do besides work?

Continuing the search in the Tribune archives turns up a death notice for George. This is shorter than his colorful obituary, but tells us a bit more. George was a Mason. His body was prepared at the Hudson and Butler Funeral Home, and a funeral held at the First A.M.E. Church, which was then on 15th Street. And his remains were interred at Evergreen Cemetery. But no next of kin mentioned, adding credence to the theory that he and Josephine didn't have any children. And why isn't Josephine mentioned?

The same edition of the Tribune also turns up a brief article noting that George left a will, but it was declared invalid. Josephine had died about 6 months before, George died following an operation for appendicitis, and... they had two adopted children?

This is sadly where the trail goes cold, at least for now. I haven't found any further mentions of adopted daughter, Genevieve Howard, or adopted son, Brown. Hopefully more information will turn up over time. But at at least we know a little more about George and Josephine Turner.